Each plot shows a dot-dash line to show the limits of broadcast range. Using an 8-bit video file as an example, in the Y graph there is a red dash-dot line at 235 (the equivalent of 100 IRE) to show broadcast white and a blue dash-dot line is at 16 (the equivalent of 7.5 IRE) to show broadcast black. All values plotted above the red dash-dot line should be decoded as white with all visual distinction in the values from 235-255 clipped to the same maximum value of white. Similarly values plotted from 0-16 would all be clipped and portrayed as black. The U and V graphs have similar lines at 16 and 240 to show the broadcast range limits of the chroma planes. Note: that these lines are only applicable to content that is decoded as broadcast range. Content marked as full range may appropriately exceed these limits. For 10-bit video, these numbers will instead be represented on a 1-1023 scale (with 0-64 and 940-1023 being clipped).

(For in-depth descriptions of how luma and/or chroma noise – and other types of artifacts– may present, the A/V Artifact Atlas is an excellent reference.)

Y Channels carry data about the brightness of a picture. Problematic variance in Y Channel values will manifest as a picture that is either too light or too dark, also known as containing luma noise. An 8-bit video will have values falling in the range of 0-255 code values per pixel. A picture with well-balanced light levels will have an average, or mid-range Y Channel value of around 128 (Y AVG). Graph readings outside of that range will indicate a picture that is either too bright or too dark. A Y Value of 0 would indicate total blackness and a value of 255 would present as entirely white. In the range of values, reference black is at value 16, while reference white is at value 235. Except during particular moments like scene changes where one might expect abrupt spikes , the average values of Y channels should remain relatively stable or constant with little variation. Portions of video showing extreme changes in average values (and not corresponding to a scene change or otherwise dramatic edit) likely indicate a picture error. Where you may expect luma spikes could be camera fade-ins/outs, or a sudden brightness in the picture, like a camera flash, for example.

In the graph below, you can see the YMAX spikes which would manifest as white lines across the video picture: 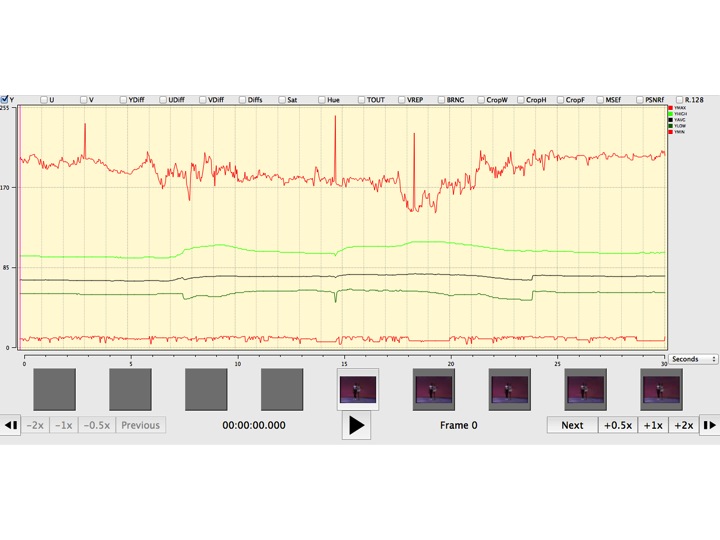 The graph below illustrates a reading with many luma spikes in the Y LOW, Y AVG, and Y HIGH, most notably in the first second of the graph. 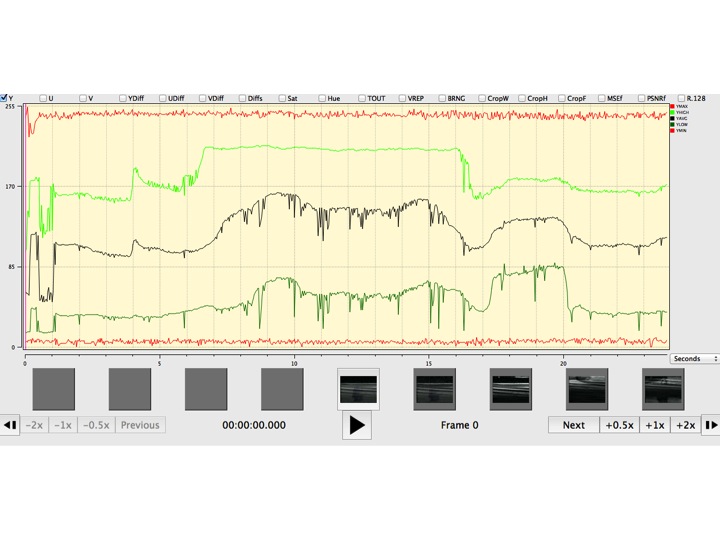 This filter works in a similar fashion as the YUV *MIN and *MAX filters, but instead of looking at the absolute minimum and maximum value for these channels, it looks at the 10th percentile (LOW, or 16 pixels) and 90th percentile (HIGH, or 235 pixels) which present the outside limits or ‘headroom’ of the legal broadcast range. An extreme minimum or maximum value could dramatically skew the graph but because they may be outside the viewable broadcast image (or the range of human perception), they may not necessarily be meaningful indicators of a problematic visual image that can be human-detectable. LOW/HIGH measurements are useful because they ignore the extreme outliers (MIN/MAX) in favor of those abnormalities which fall in the range of human perception. 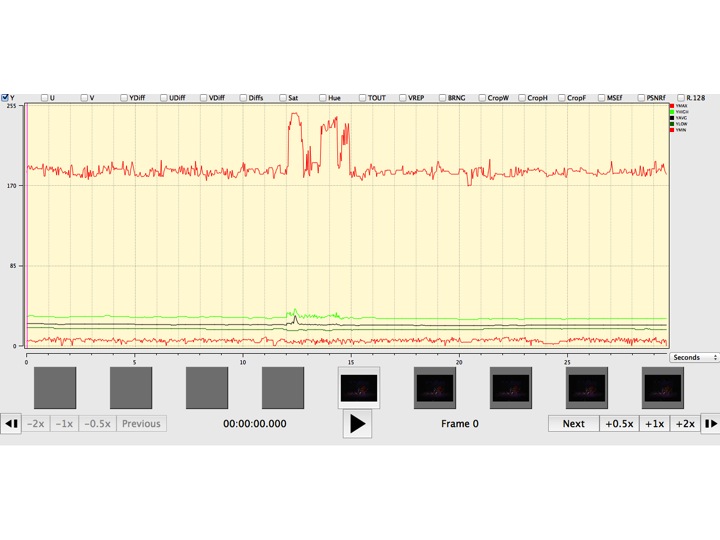 The U and V Channels represent the chrominance, or color differences of a picture. U and V filters act to detect color abnormalities in video. It can be difficult to derive meaning from U or V values on their own, but they provide supplementary information and can be good indicators of artifacts, especially when occurring in tandem with similar Y Value readings. Black and white video contains no chrominance information so these filters should produce flat lines (or “no data”) for UV channels. Activity in UV Channels for black and white video content, however, would certainly be an indication of chrominance noise. Alternatively, a color video showing flat lines for these channels would be an indicator of a color drop-out scenario.

The graph of this video file shows dramatic spikes and drops in U and V MIN/MAX values. You can also see attendant activity in the Sat (Saturation) and MSEf (Mean Square Error) filters (see descriptions below).

This is a good example of dramatic activity in U and V channels showing around the 4-6s mark, corresponding to chrominance noise in the video (visible rainbow-ed speckles across the picture). 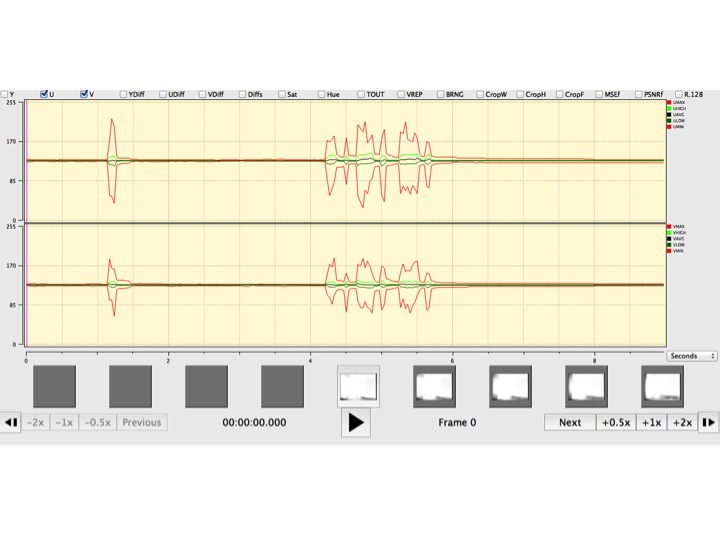 Notice U noise in the graph below from approximately 2.86s to 4.37s. Also seen in U DIF reading. 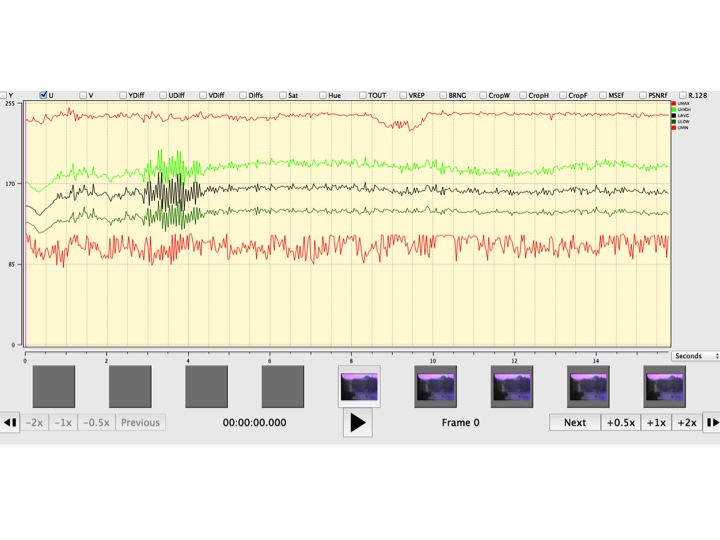 This QCTools filter selects two successive frames of video and subtracts the values of one from the other in order to find the change, or difference, between the two frames (measured in pixels). This information is meaningful in that it indicates the rapidity with which a video picture is changing from one frame to the next. Aside from scene-change scenarios, a video picture should not undergo dramatic changes in these values unless an artifact is present. A scene-change would present as a short but dramatic spike in the graph, and that is normal. Other YUV Difference spikes may be present in cases where picture problems are visible. Often, head problems with corrupted frames will result in large YUV Difference values/graph spikes. 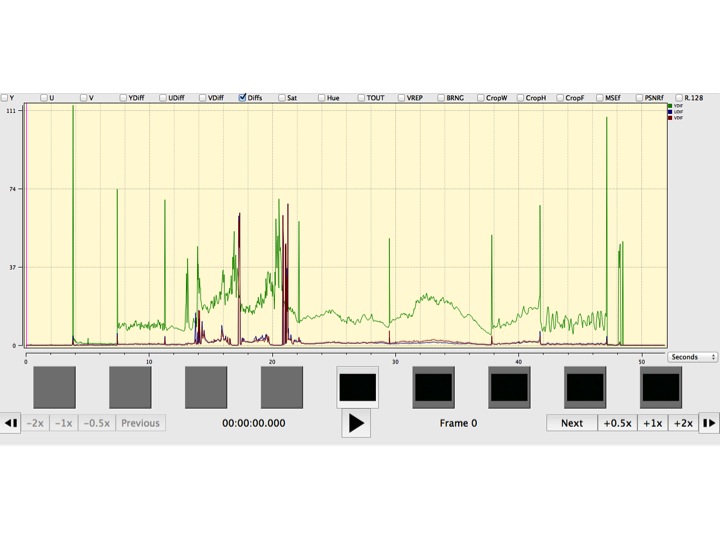 Saturation is a measure of the degree to which a color is diluted with white light; in other words–how vivid or ‘true’ a color is. Other terms, like ‘bright’, ‘pale’, ‘pastel’ ‘washed out’, etc. may be used to be speak to the quality of Saturation. A vectorscope view is a good way to see Saturation data–a large plot area indicates much saturation while a small plot area indicates little to none. A Saturation rate of 128 is considered illegal because data in this range can’t be translated to/from camera data, and a videotape is technically incapable of storing values in this range (or beyond).

‘Hue’ is a term used to describe color; “Blue” or “Red” can be thought of as Hues (see also ‘Saturation’).

In analyzing video, human skin is often a good baseline against which to measure appropriate color representation. Skin hue should fall in the 143-148 range; if skin registers significantly above or below that range, it’s likely an indication that your video isn’t accurately storing or displaying color data accurately.

This filter was created to detect white speckle noise in analog VHS and 8mm video. It works by analyzing the current pixel against the two above and below and calculates an average value. In cases where the filter detects a pixel value which is dramatically outside of this established average, the graph will show small spikes, or blips, which correspond to white speckling in the video. The range of 0-0.009 could be considered normal and anything above that range may be a quality issue.

You can see several blips in the graph reading, especially around 7.5s, 15s, and 24s 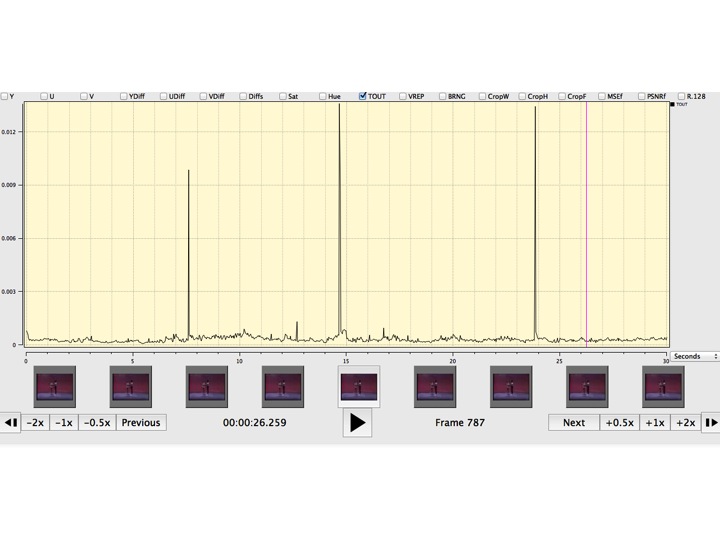 Vertical Line Repetitions, or the VREP filter, is useful in analyzing U-Matic tapes and detecting artifacts generated in the course of the digitization process. Specifically, VREP detects the repetition of lines in a video. If a time base corrector notices a video signal dropout, it will compensate by playing the same line of data several times, hence the appearance of repetitious lines.The filter works by taking a given video line and comparing it against a video line that occurs 4 pixels earlier. If the difference in the two is less than 512, the filter reads them as being close enough to be appear repetitious. Cleaning your deck and/or tape may remediate this problem. 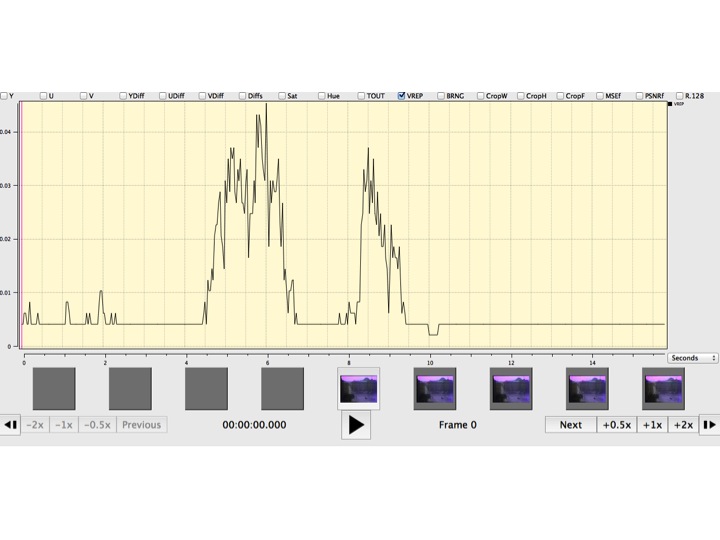 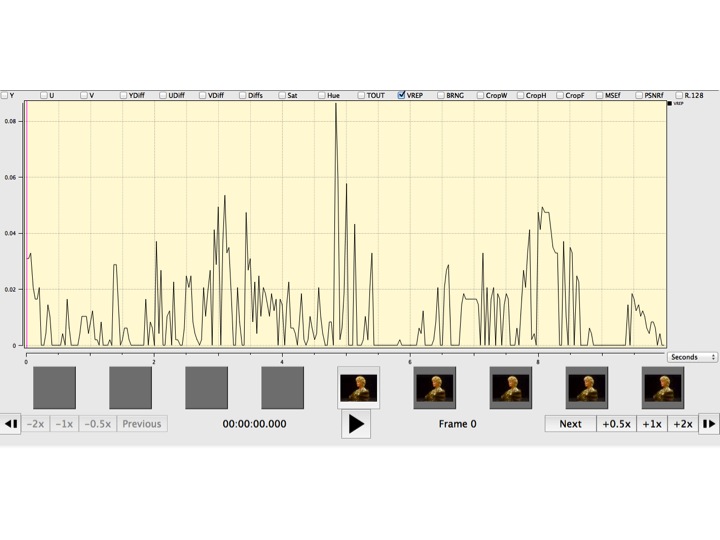 The BRNG filter is one that identifies the number of pixels which fall outside the standard video broadcast range of 16-235 (8-bit); 64-940 (10-bit) pixels. Normal, noise-free video would not trigger this filer, but noise occurring outside of these parameters would read as spikes in the graph. Typically anything with a value over 0.01 will read as an artifact. While the RANG filter is good at detecting the general presence of noise, it can be a bit non-specific in its identification of the causes. 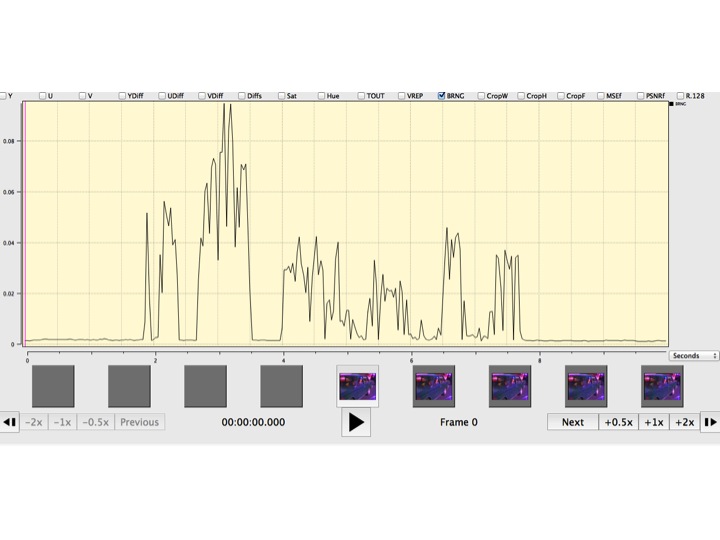 This filter detects portions on either side of your video which may contain not contain any picture data. In the case of pillarboxing, for example, you’ll have black bars on the left and right sides of your video. This filter will detect and present that information in the graph reading.

This filter enables you to view which parts, if any, of your video which contain no picture data. In the case of letterboxing, for example, you’ll have black bars both above and below your picture. This filter would detect and present that in the graph reading.

Presents the total number of rows (Crop Height) and columns (Crop Width) which could be removed from the edges to only remove black pixels.

This filter plots the Peak Signal to Noise Ratio between the video in field 1 (odd lines) versus the video in field 2 (even lines). Lower values indicate that field 1 and field 2 are becoming more different as would happen during a playback error such as a head clog. See http://ffmpeg.org/ffmpeg-filters.html#psnr for more information. 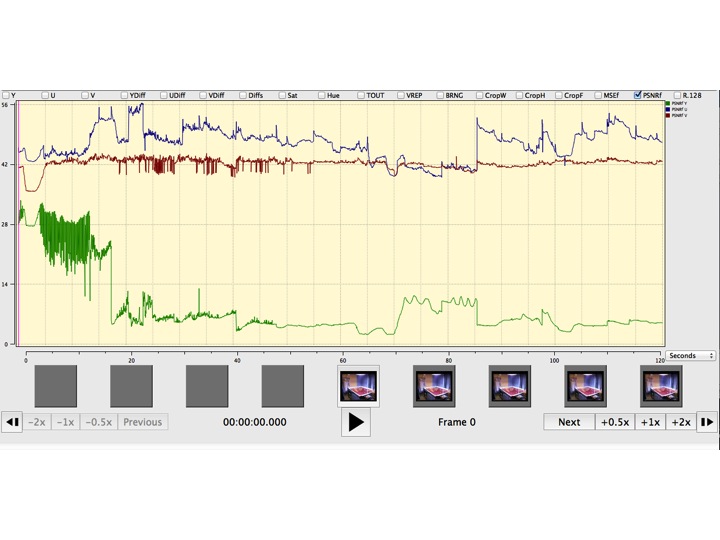 The duration of the frame’s presentation. Note: for constant frame rate video this will be the same value for every frame while it will vary for variable frame rate video.

This filter shows the encoded size of the frame. 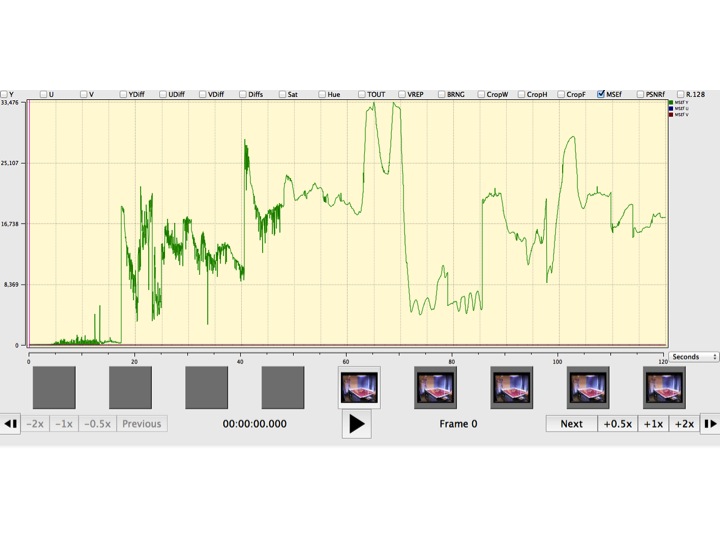 This filter plots the Structural SImilarity Metric between the video in field 1 (odd lines) versus the video in field 2 (even lines). Lower values indicate that field 1 and field 2 are becoming more different as would happen during a playback error such as a head clog. See http://ffmpeg.org/ffmpeg-filters.html#ssim for more information.

This filter plots a determined on if the frame appears to be bottom field first (bff), top first field (tff), progressive (prog), or undetermined (und). This assessment uses only adjacent frames to determine the interlacement characteristic. The value is plotted with a half-life of 1, so each frame’s interlacement characteristic is halved (i.e., it contributes only 0.5 to it’s classification) and then plotted. See http://ffmpeg.org/ffmpeg-filters.html#idet for more information.

This plots uses an assessment that tries and detects fields that are repeated between adjacent frames (a sign of telecine). See http://ffmpeg.org/ffmpeg-filters.html#idet for more information.

This plots quantifies temporal frame luminance variations as the average mean of 5 frames at a time. See http://ffmpeg.org/ffmpeg-filters.html#deflicker for more information.

Plots the graylevel entropy of the histogram of the color channels. A color channel with only a single shade will have entropy of 0, while a channel using all shades will be 1.

Plots the frame-to-frame difference in the graylevel entropy in the histogram of each color channel of the video frames. Incoherancy in plotted values may help indicate a damaged digital tape source (such as scratched D5 tape) or highlight digital manipulation of the image. The values should correspond to chaos or discontinuity in the histogram plot.

R 128 refers to a European Broadcasting Union (EBU) specification document governing several loudness parameters, including momentary, integrated, and short-term loudness. QCTools specifically examines momentary loudness, or sudden changes in volume over brief intervals of time (up to 400ms). This can be helpful in identifying areas where volume may exceed upper loudness tolerance levels as perceived by an audience.

Provides a metric to represent the mean phase of each audio frames. Value is in range [-1, 1]. The -1 means left and right channels are completely out of phase and 1 means channels are in phase. See https://ffmpeg.org/ffmpeg-filters.html#aphasemeter for more information.

For selected audio tracks this graph plots the DC offset (mean amplitude displacement from zero), minimal sample level, and maximum sample level. Note that this value is plotted per audio frame and not per audio sample.